Take a weekend break in Graz and visit the Christmas markets
Take an Advent break and choose from more than 50 city hotels of all standards. No reservation fees.
Check availability

Graz puts a lot of effort into its Advent events. The Tyrol has its mountains, Vienna has the capital status and Salzburg has its cultural significance - but Graz probably outdoes them all in terms of the organisation of the Advent period.

Austria's second city has a wide variety of markets but it also offers the Advent calendar projected onto the Rathaus in the evening and the giant ice crib display at the Landhaus. 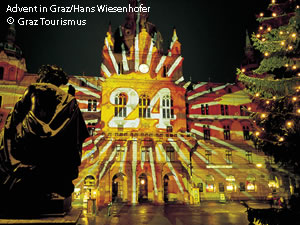 The tourist office has put together a 'nativity trail' through the main landmarks and Advent locations and offers an informative booklet which can be downloaded from their website (link at bottom of page).

Another Advent Market organised by artists and craftspeople in the nearby Mehlplatz area.

Traditional Christkindlmarkt in the Franciscan Quarter

This market in the Franziskanerviertel is the oldest in the city and concentrates on the traditional wares of the German Advent markets.

Other Things To Do in Graz

Admire the heritage. If a city is awarded the UNESCO World Heritage title, it would be uncouth not to take a look at the reasons why. In the case of Graz it is the range of inner-city architecture which remains from differing periods from the Middle Ages through to the 18th century. 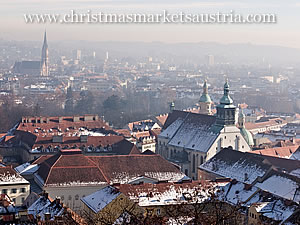 Take in the style. As well as being granted the title of a World Heritage site, the city of Graz is also one of UNESCO's Creative Cities and has been awarded the title of City of Design. It was also one of Europe's Capitals of Culture in 2003. There is a specific booklet available from the city explaining the various aspects of Design as it applies to Graz.

Look at the cultural influences. Graz is not just about Styria - although it is by far and away the most important city in this part of the country. For a start, it has a very strong Slovenian influence, with many workers and students from over the border. And students brings up another point: it is a very young city with tens of thousands of people studying here from different parts of Austria, Slovenia and other countries. So it is - for an Austrian regional city - a remarkably cosmopolitan location.

Plan Your Own Christmas Market Break in Graz

Graz Airport is located to the south of the city in the village of Feldkirchen near the junction of the Pyhrn and Sud motorways. The airport is connected to the city centre by the regional rail line and by a local bus service - a journey takes around 15 minutes.

The main railway station in Graz is located outside the city centre to the west. As one would expect for the second-largest city in the country, there are good connections to the rest of Austria as well as to other European countries. The local train, tram and bus services in the area are run by the Steirische Verkehrsverbund GmbH (StVG).