The tradition of producing handmade cribs during the Advent period is something that can be traced back to the early days of Christianity.

Despite the popularity in the German-speaking countries, it was a tradition which was shared with the Mediterranean region as well.

For example, the origins of the Christmas crib in its present-day form, are thought to be in the carved scenes in either stone or wood which became popular in some of the churches in Italy. 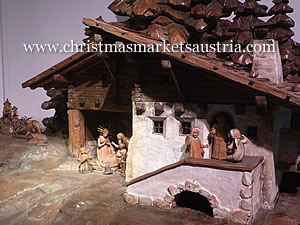 During the time of the Reformation, the Catholic church, and especially some of the monastic orders, saw the crib tradition as a way to focus religious belief and to bind the idea of Catholicism with the poorer sections of society.

The connections of the crib to the mass of religious believers were multiple: 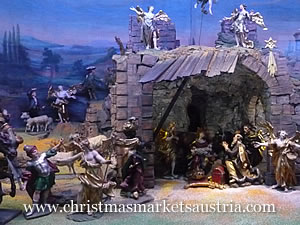 The Age of Enlightenment in the 18th century led to many of the most popular cribs being removed from religious buildings in Austria and Bavaria under orders from the authorities.

However this increased the 'democratisation' of the Christmas crib, where local woodcarvers would create a display for their own community, rather than expensive and famous outsiders being called in by the religious authorities.

Especially in the Tyrol and Salzburg the custom of the handcarved cribs became extremely well-entrenched, with people also creating cribs for display in their own houses during the Advent time.

The crib had stood as one of the central points in the public celebrations of Advent leading up Christmas, but it became less important as the Christmas tree grew in popularity. Luckily, many of the handcarved cribs were saved by collectors during this time.

Nowadays, the idea of the Advent crib is once again enjoying a boom, with many villages and towns having their own 'Krippenverein' ('crib group') who organise the display. Local folk art or folk history museums also frequently organise special exhibitions of historic cribs from their region during the Advent period.